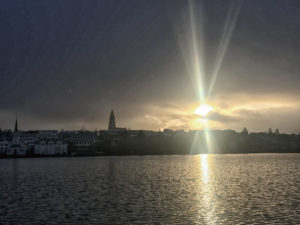 We have one day left in Iceland. I’ve been doing a lot of thinking while we drove the ring road about what I want the shape of my life to be. Ever since walking out from under the shadow of grief I’ve been in flux, knowing I want -something- but not knowing exactly what. Being in the place of no-decisions is difficult for me. I tend to be a very directed person. If I want X, I go for X all out. Living in uncertainty is exhausting.

The past six weeks have been the happiest I’ve been since Greenland last year. God how I hated going back to Seattle. While there’s an admittedly magical quality to traveling around Iceland for two weeks – a time outside of time with a person whose company I adore – for the entire month in Longyearbyen I was deeply happy. I got good work done. I went for what walks I could without a gun. I took photographs of things that I loved, and thought about strategies for examining that landscape more intimately. I met people I liked, and who seem to like me. I’m a social creature and will always build some kind of network. That used to surprise me, but I’ve come to accept that I was always in Mark’s shadow. But I don’t live there anymore. I am a changed person, scarred without doubt, but resilient. Would I love living in Longyearbyen? Would I love those hard, dark months? The optimist in me says there’s no better time for getting the kind of work done that I need to do than a time when I’m unable to do much else. I’ve never suffered from SAD. The little time I’ve spent in places that are winter-dark didn’t trouble me, so who knows?

But then Iceland, beautiful luscious Iceland. So gorgeous, so tempting. Loving Iceland is like breathing, like the impulse to life and love and all the bright shiny things. I don’t know how people -don’t- love Iceland. However, Reykjavik, the 11th most expensive city in the world, is out of my reach. But isn’t the only city, and there are many, many charming towns. Akureyi is a charming small city, and cheaper than Seattle. What would that be like? Bogarnes, also a delight. As was Vik. As was Havammstangi. It’s been a long time since I’ve lived in a small town, but I am not who I was. Maybe?

I have another eight weeks to think about my life, my desires, my needs and dreams. I have a whole month to spend in Laugarvatn which is definitely a small of the small towns. I will see how I feel about that. What I do know is that when I think of going back to Seattle I want to throw a tantrum worthy of a three-year-old. No no no no no. But of course I must, at least for now. At least in December. But it doesn’t have to be forever.