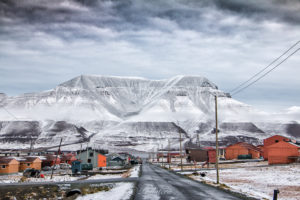 My time in Longyearbyen is a little more than half over, and a month now seems way too short a time to stay here. I should have opted for two months, but I did not. In two weeks I have watched the change from 24 hours of daylight to 13 hours of daylight – 11 hours of true night – in just two weeks. Think about how fast this is happening! The days are much colder now, mid 20s to 30, and with the wind blowing down the Longyeardalen it is definitely cold, although for some locals this is still “sweater weather.”

Being here has made me believe we’re wrong to think the arctic has seasons. Other parts of the world have seasons. The arctic experiences a single, year-long day. Four months of day, four months of night, with two months for sunset and two for sunrise. I am truly sad not to be here for polar sunrise. I understand that February and March are exceptionally beautiful – one being called the blue month and the other the pink month for the color of the light.

My thinking about my work has clarified while I’m here. My studio has two windows, one looking across the valley to the rocky scree of Platáfjellet, the other down to the mouth of town and across to Hiorthfjellet. Once, the Longyear glacier stretched all the way to Adventfjorden. That was a long time ago. But even in the short time Longyearbyen has existed as a town the glacier was once an easy walk from Nybyen (where my studio is). Not any more. 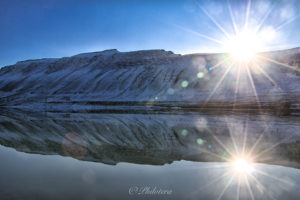 The arctic is changing. We know this in the sort of way we know gravity exists; it’s a fact we just don’t think about. That’s a mistake. If there’s a canary in the mine of climate change it’s the arctic. The ripples from every iceberg’s birth touches every shore. Our comfortable lives depend on the world’s freezer remaining frozen, and it is not. But more than that, human greed is also a wreaking ball in the arctic.

Urban trash from Europe is littering Svalbard’s once pristine coast. People go out periodically to collect it – 1.5 tons of trash from one bay alone, and Svalbard is full of uninhabited bays and fjords. Fishing boats dump used and damaged nets overboard where they entrap and kill marine life. Micro plastics are showing up in the guts of fish and sea mammals. Here, in the most uncontaminated place on Earth, pollution has arrived. 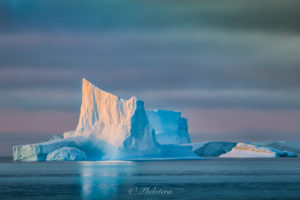 Last year, 145,000 tourists came to this town to travel into the arctic. Predictions for next year are for more people. Even with the most stringent controls, there’s no managing the damage such a quantity of humanity will do. Cruise ships dump their waste into the arctic seas. People ignore warnings not to walk on the fragile tundra destroying plants hundreds of year old. They approach wild animals they should leave alone. They litter.

If I were queen of the universe, I would have this entire archipelago declared a world park, and limit the number of people who can visit. Maybe there should be a lottery to come here. Cruise ships over a certain size would be forbidden. I would limit the growth of Longyearbyen, because this small arctic town is going to explode, and it feels to me like no one here has any notion of the tidal wave that will hit them in the next ten years. I don’t believe they will be able to manage their growth. They can’t manage what they already have. They aren’t thinking about the future, but about the short term profits that can be made right now.

And this doesn’t take into account the shoving that the northern countries are doing over mineral rights and shipping rights as the northwest passage opens. It doesn’t take into account that we have no idea what bacterial and viral plagues have been kept hidden under the ice. Rabies is endemic among arctic fox, first appearing in Svalbard in 1980. No one knows how it got to the island, and theories range between carrier foxes crossing the ice in winter to foxes finding infected carcasses that have been frozen for years, but are now thawed enough to be scavenged.

This year infected foxes have been found near Longyearbyen, and infected reindeer bitten by sick foxes. Puffin populations are in severe decline due to pollution. The expectation is that they will be extinct before the next century. Polar bears, that much loved arctic icon, are suffering great challenges as the ice melts, less fatty seals from the south penetrate the arctic offering inadequate nutrition, and the temperature warms. Polar bears can’t survive in the wild at temperatures over 50F. 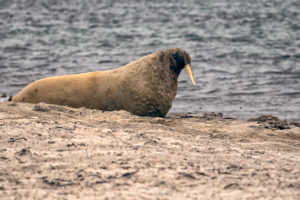 For me, it’s vital to witness this world disappearing. As I think about my work I realize that I’m painting the last days of a great and magnificent landscape that is vanishing even as I walk it. All I can do is paint my experience of this disappearing beauty in what can only be an arctic elegy. It breaks my heart, and yet I know I am lucky to be here to see the arctic in its last glorious days.

When I am eventually back in my studio I will need to work larger and I think on linen. I can see paintings in my mind that I want to do. Some of them are versions of what I’ve already done, others are completely new. I want people to recognize what we are destroying, and I’m thinking hard about how to do that. When you’re depicting something as beautiful as the arctic the problem becomes the fact that its beauty overshadows the fragility of 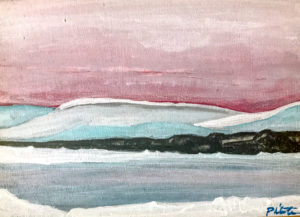 the place, and the very loveliness that is being lost seems eternal on canvas. I want people to see that this remarkable place is being damaged beyond hope of recovery. I haven’t figured out how to do that, but I’m working on it. Maybe something time-based, but that’s just an initial idea. Whatever I come up with, it will be hard. And it should be, it should be painful because if it doesn’t hurt me, how will anyone looking at the work understand the tragedy that is unfolding?