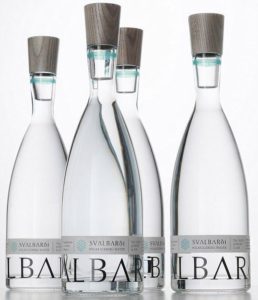 Today, thanks to a question from a friend, I did the research to discover that I am in fact drinking glacial meltwater when I drink from the tap. That’s… amazing. Astonishing. It means ice for drinks – 10,000 year old glacial meltwater. When I wash my face, 10,000 year old glacial meltwater. When I flush the toilet…. You get the picture. It makes sense. It’s the water that’s readily available. Indeed, the Longyear River and all the feeder creeks that flow into it – all glacial meltwater. It’s just not a thing those of us who live elsewhere contemplate. It feels like it should be rare and special. But here, you can drink it straight from the tap. Also, there’s a local company that sells it. They pour it into glass bottles, put a pretty blue label on it that says “Glacial Water from Svalbard,” then sell it to tourists for 75 euros a bottle ($87). I kid you not. 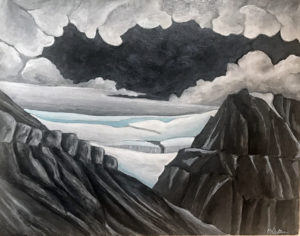 My studio neighbor Barbara said to me today that tourists will buy anything made in Svalbard. This came out of a conversation we had after she came in to see what I was working on. After admiring the work (featured here) she suggested I go to a couple of local shops and museums and show them my work. I brought a number of 8” x 8” pine boards. Her feeling was that if I combined the fact that they’re painted on wood, of Svalbard landscapes, painted with graphite (which might come from Svalbard) I could sell quite a lot of them. “You’ve got a real niche, my girl. You shouldn’t waste it. And anything you sell here, you don’t have to bring back with you.”

She has a point. So Saturday I’ll start working on a few small pieces so I have something to show to 78 North, and the Polar Expedition Museum, and that other place she suggested whose name I can’t remember. Apparently, there’s a Dutch woman who comes to Longyearbyen for two months, paints a large quantity of postcard-sized images, and leaves them here to be sold. And that’s how she supports herself in Holland for the rest of the year.

A little later Emma, who replaces Joanna on her days off, showed a giant of a man upstairs. He’s interested in studio space for the new year. Curious, I asked him what he did. He’s a German coal miner, and also does guided tours of Mine #3 (almost everyone in Longyearbyen has three – five jobs to support themselves). He began painting abstracts a year ago. “I have so many feelings in here,” he thumped his enormous chest, “And abstraction, I fling the colors and I feel free like a child again.” He grinned. “I am learning the spray paint technique (by which he meant air brush), I want to do big abstracts of Svalbard with the mushing together of colors (air brush blending). I have a friend who will sell them in Germany.”

I asked if he talked about art with anyone. He shook his head. “I listen to people talk. I go to galleries here and in Germany. I read books.” His eyes glowed. “But I know what I want to do. I don’t care what other people think, a coal miner like me being an artist. I say fuck them, I’m sorry for the word, but fuck them. I can do what I want, and this makes me feel good. Even the bosses, I say fuck them. You don’t like I’m an artist? See how easy it is to find experienced coal workers for Svalbard.”

His determination was altogether admirable, and I told him so. Shyly he asked, “Would you like to have coffee next week? I can give you my number, if you like you can call or text. We can have coffee.” He paused. “I tell you I am safe. You don’t have to be afraid. I am a good man. I don’t even have a gun for the polar bears.”

This did not surprise me. Wolfgang is so big, any polar bear would think twice about attacking him. He dwarfs most football players. “If we have coffee, I will bring you a bag of coal.” His eyes gleamed. “We produce the finest graphite in the world (I told him I was working with powdered graphite). It is the best, you will like drawing with it.” 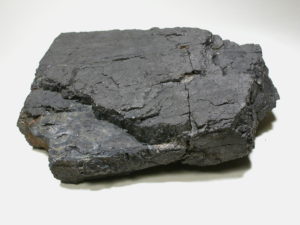 After he left Barbara popped in again. “If you don’t want to see him, you can walk down to the marina. You’ll see a big mountain of coal waiting to be shipped out. It’s free to residents. Most people here heat with coal. You go and pick up whatever you need, whenever you need it. Just pop it into a shopping bag. No one will say boo. You’ll have more graphite than you can ever use. He’s right, it’s great stuff. It really is the best in the world.”

I think I will call Wolfgang next week. I liked him, I liked his bold decision to be an abstract artist. And while I usually shy away from big men – my experiences have often not been good – I had no doubt that he was a good man, and would be no threat to me. That’s when it struck me that while I love the landscape here, what makes me feel so happy is that in the arctic, I am not afraid. I’m not worried when a group of three men walk toward me on the street. I know they will pass by with at most a nod and a “Hei.” I’m not anxious about gangs of teenagers. Or walking past construction crews. Or drinking alone in a bar. No one will speak to me unless I speak to them first. The only exception to this is women – other women will open a conversation with me on the street or in a coffee shop. No man has done that. So yes, I feel safer here than at home – polar bears and mud slides be damned. And feeling safe sometimes equals happiness.

4 thoughts on “A Place of Greater Happiness”