My life is made of impossible things. 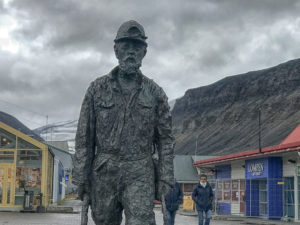 I left Seattle on Tuesday, August 28. Today is September 2.  In that time, so much has happened. I’ve been in two countries, three if you count Svalbard as a separate country, and Norway does even though it owns it. I’ve been asked out on a date by one Icelandic man. Missed my flight to Svalbard, and spent the resulting day in the company of another man. We parted with sorrow today. He has commitments in other places, and I have my own life. We will never see each other again. In the normal course of things, we should never have met, but that is how fate amuses herself sometimes.  I encountered a wealthy Norwegian who pressed his phone number upon me and asked me to contact him whenever I’m next in Oslo. Clearly here at the top of the world, I am freaking catnip.

I’ve seen old friends, and agreed to meet them again at the southern end of the world, in Ushuaia in March. We will go to Antarctica together on the dear Polar Pioneer, last year’s Finnish icebreaker. I love that boat. I’ve made new friends, Joanna and Felix, two dog mushers here in Svalbard, and Anna the bartender at what may become my local. But as I’ve been advised, I should check every bar out first, and not settle for the most convenient one.

And most importantly, I’m settling in to my new home. I have a room with two narrow beds, a coffee table, a desk, and a wardrobe for my clothes. I spent most of yesterday cleaning the room and setting it up. I’ve assigned “aways” for important things

like my keys, glasses, and contact lenses. I know where the washing machine is (no dryers here, everything is air dried). There are two bathrooms down the hall, and the shower is an entire room with water so hot it seems the idea is that if you take a shower without getting a second degree burn, you aren’t clean enough. It takes a lot for water to be too hot for me. In many ways this is similar to a dorm set up. It will be a spartan existence, but that suits me just fine.

There’s a common area that has a kitchen, a TV, and two conversation-friendly sofas. While I’m currently the only person here, I’ve been told someone else is coming in on September 5, so I will have company. The grocery store is 1.5 miles away, and to get there I walk downhill, which means I walk uphill coming back. I figure three days shopping is about as much as I can carry. Shopping is a bit of an adventure. My Norwegian is not up to understanding many food labels. For example, I thought I bought salami.

Instead I bought some kind of processed goat meat. I don’t like goat. The bread is not sliced, you have to slice it yourself – at least in Longyearbyen. I just ate some thing which I thought was yogurt, but maybe it wasn’t yogurt it didn’t taste like yogurt, and it wasn’t skyr, but it wasn’t terrible and I’m not dead so it’s okay. Which is good since I bought three of the whatever it is I thought was yogurt and it isn’t. I did successfully buy butter (smør) and heavy whipping cream (kremfløte) so thank you Scandinavian Language Institute for that. 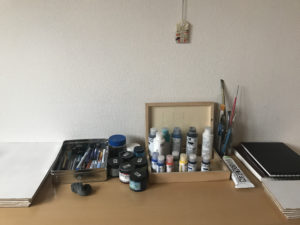 Today I saw my friends Gary and Robyn, farewelled my admirer, and then set up my studio. I figured out how to get the heater to work (very important!) washed the floors and surfaces, and discovered an entire trash bag of down feathers. After getting everything arranged, I spent some time in the Galleri talking with Joanna who’s knitting an Icelandic sweater with a dog team motif she designed herself. The sun is out, the clouds have burned off and

it’s a glorious day in Longyearbyen. This time of year, geese are migrating, their honking accompanies me on my walks. The air is full of the sound of rushing water as so much meltwater flows down to the fjord, and they are beginning work on the avalanche walls that hopefully, in another year, will make Nybyen (new town) safer to live in. I’m not worried about polar bears as much as I’m worried about mud slides.

Tomorrow I’ll start work, which means I’ll get up at an early hour and go for a long, long walk to start taking pictures of what I want to paint. There are some buildings by the marina that intrigue me. Joanna assured me I won’t need a gun to walk there, though I can get a license and rent a gun from the government office. I’m not sure I’m going to do that. I also want to visit the small cemetery. No one dies in Longyearbyen anymore, but they used to.

13 thoughts on “Made of Impossible Things”