When traveling, given a choice between a multi lane highway, and a mysterious single lane road, I will take the single land road every time. This is the philosophy by which Kij and I travel. Asphalt or gravel? Gravel. Gravel or dirt? Dirt. Granted we have ended up in the middle of nowhere Iceland, having to go back when the road disappears, but totally worth it!

And that was how we stumbled upon Cave People, which is my favorite Icrelandic historical site. We were leaving Laugarvatn after dropping my worldly possessions at the residency. We were fortunate to spend a fantastic couple of hours with current resident artist Baniprossono and his wife Putul talking about art. We were pleased with what we’d both thought was going to be a dull day driving back to Reykjavik when we spotted a sign 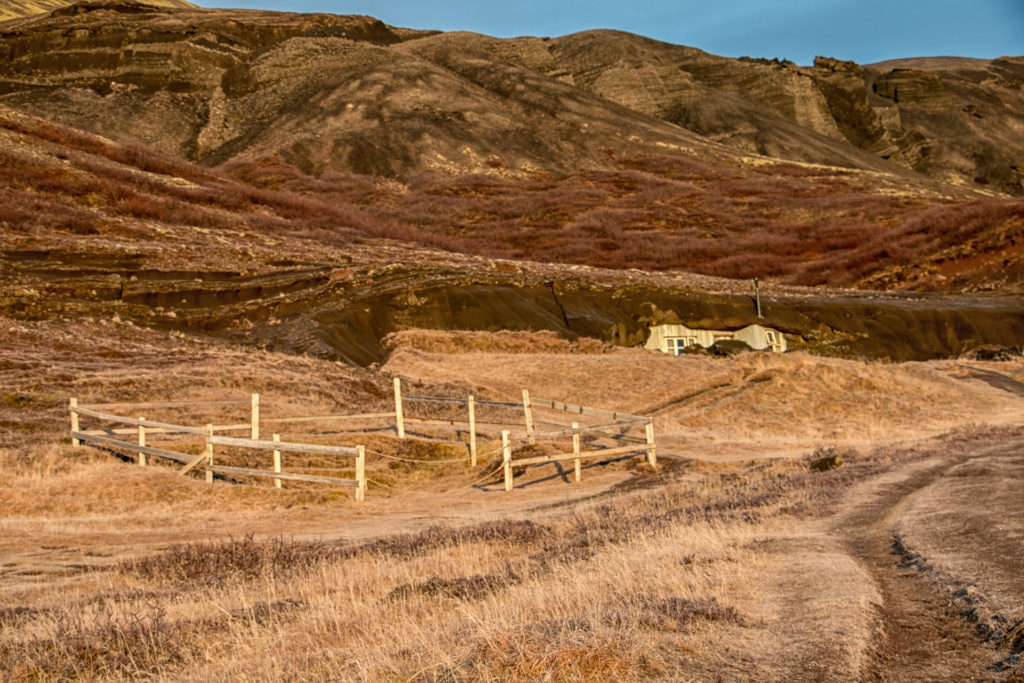 leading up a gravel road that said “Cave People.” 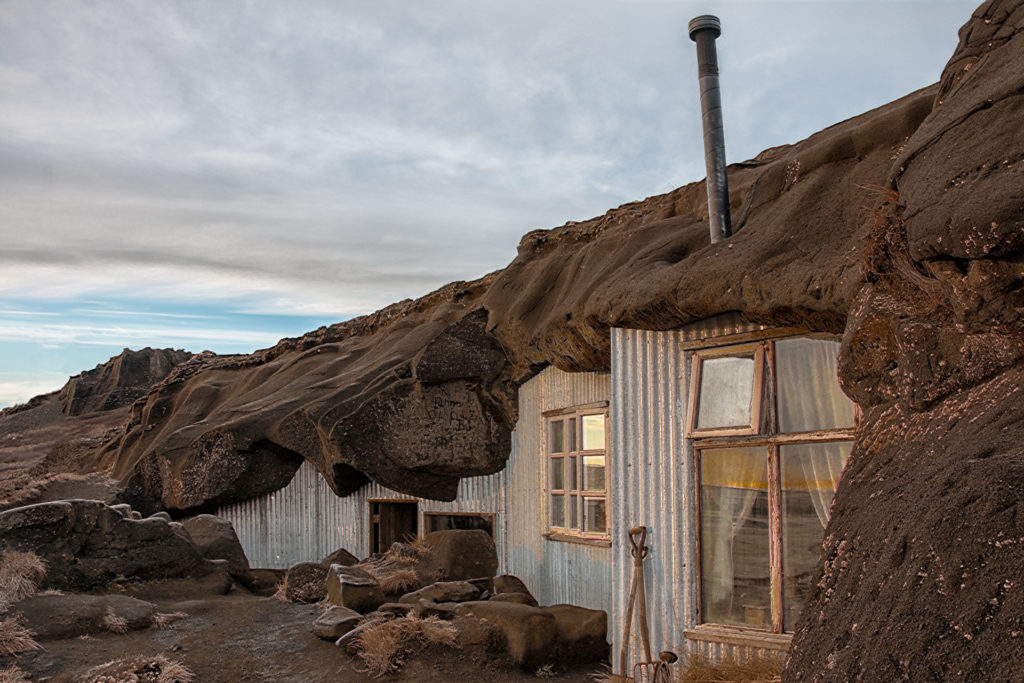 There was really no choice. We took the road. And, as Robert Frost said, that made all the difference. We fell in love with the Cave People site, Laugarvatnsheller. Located between Þingvellir National Park and Laugarvatn are two caves dug out of the mountain’s soft limestone with a spectacular view across the valley. Although it’s not certain who first made the caves, it’s widely believed that the original inhabitants were Irish monks. A nearby lake, Apavatn, is believed to be named for an Irish settlement. While apa means ape in Icelandic, it’s commonly thought that Apavatn is derived from Papavatn, or Papish lake alluding to the monks. 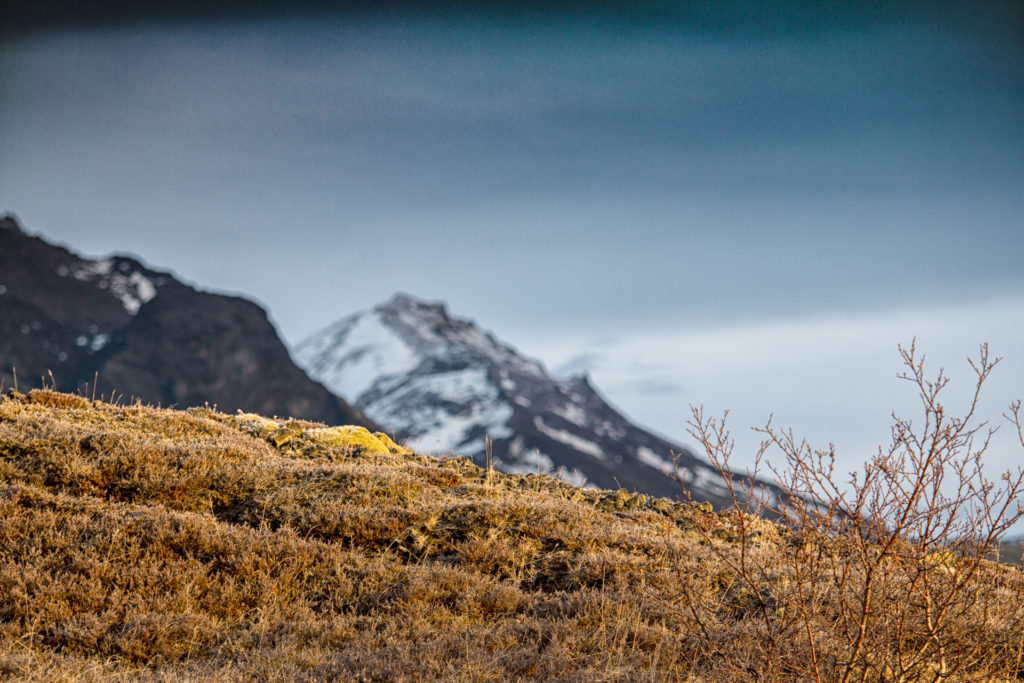 After the monks, the caves were used by local shepherds for shelter when out with their flocks. This is when the first stories of the caves’ popularity with Iceland’s resident elves began. The story I was told is that a shepherd intended to spend the night in the cave, but woke up, having been dragged outside. Thinking he must’ve been sleep walking, he went back in the cave. And woke up outside again. After the third time this happened, the terrified shepherd ran all the way back to Laugarvatn, well, maybe he ran at first, but then he walked. When he arrived and asked for shelter, he told everyone about the supernatural event that had happened to him. Later that night, a big snow storm blew in. In the morning, everyone agreed that the elves had saved the shepherd’s life by frightening him away from the cave. If he had stayed in the cave, he would have died. 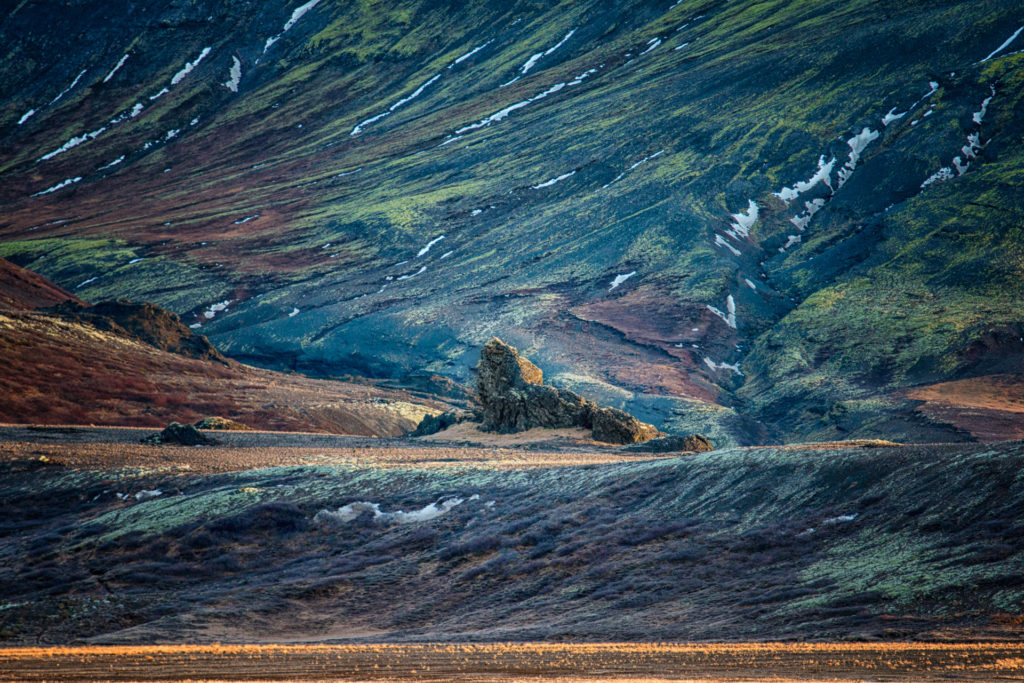 Shepherds stopped using the caves after more encounters with elves were reported. Why was this location so popular with the huldufólk? Maybe because within a short distance of the caves is a rock known as an elf church, a natural gathering place for them. It’s important to remember that while the Icelandic countryside lacks much in the way of wildlife, that doesn’t mean it’s empty.

In 1910 a young couple tried their luck in the caves. They dug out the limestone to enlarge the 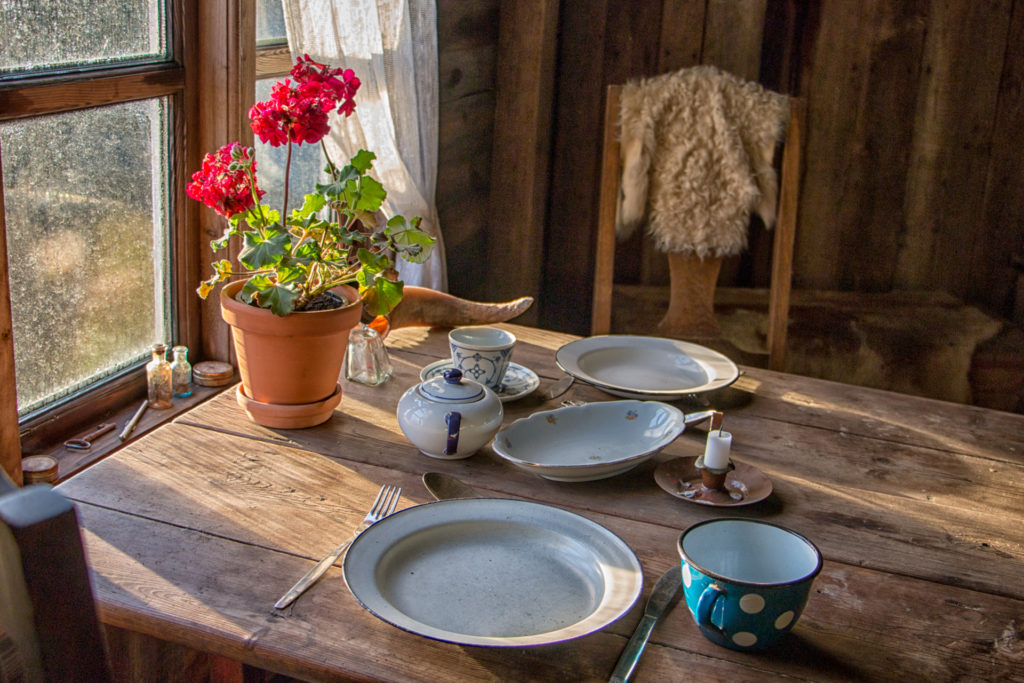 caves, and lived there for a year before moving on. In 1918 Jón Þorvarðsson and Vigdís Helgadóttir moved into the caves. They lived there for four years, even having children there, which the father delivered. You might wonder how they lived in such a difficult place, in such a harsh climate.

They survived by raising sheep, which had winter shelter in the smaller cave. The larger, family cave was heated by keeping a cow in the back room, as well as by a small wood burning stove. They raised potatoes, picked wild berries, and hunted ptarmigan which were sold in Reykjavik. In the summer they sold food to Icelandic tourists visiting the Golden Circle. It was a hard life, and in 1922, they too moved 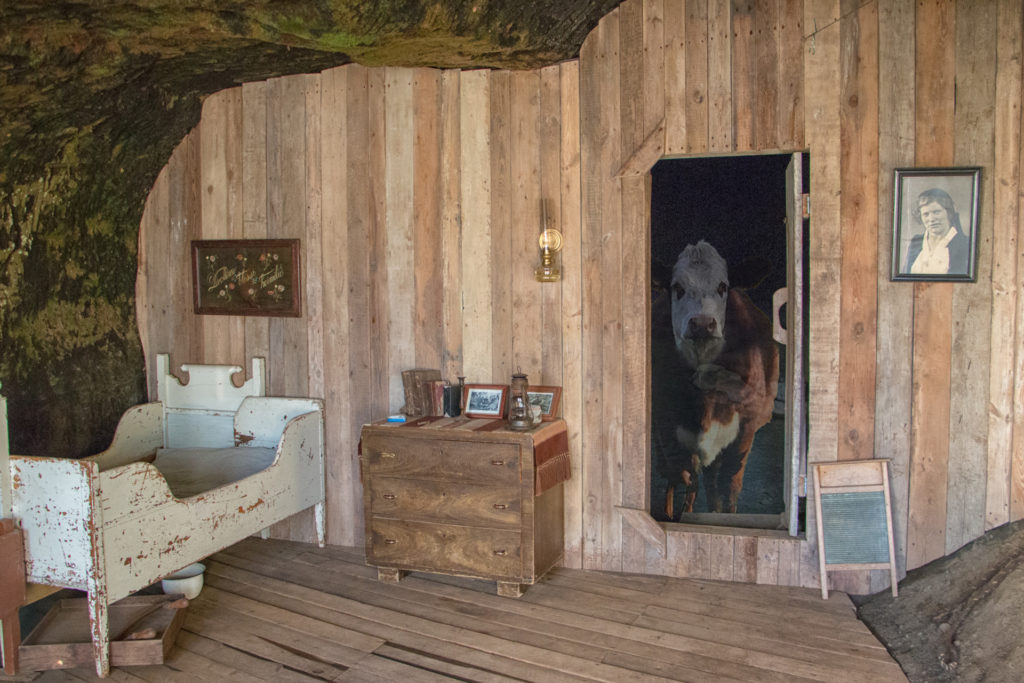 on, leaving the cave to the wind and the elves.

W.H. Auden visited the caves in the 1930s. He talks about them in his book, “Letters from Iceland.”

“We saw more caves later however; we went out of our way to see them in fact, branching up a grassy slope to the left. These ones were rounded openings in a very soft cinder-coloured stone which I maintain to be a kind of volcanic sandstone. Maisie says that a volcanic sandstone is a contradiction in terms; it is a sad reflection on female education that none of us knows any geology…. Well, till a few years ago these sandstone or whatever-they-are caves were lived in by a couple with a cow. The rock is very easy to cut and you could see where they had cut slots for

the door-bars, and also where the cow had spent long nights munching away the wall. The rock outside, which is of a very odd formation — quite Barbara Hepworth — is covered with carved names, names of people and ships and the registration numbers of cars. Someone has also carefully cut out the word SILLY and put a square around it.”

It is true that the caves are decorated with graffiti, some of it very old. How old is as yet unsure. Smári Stefánsson who runs Cave People told me the archeology department of the university 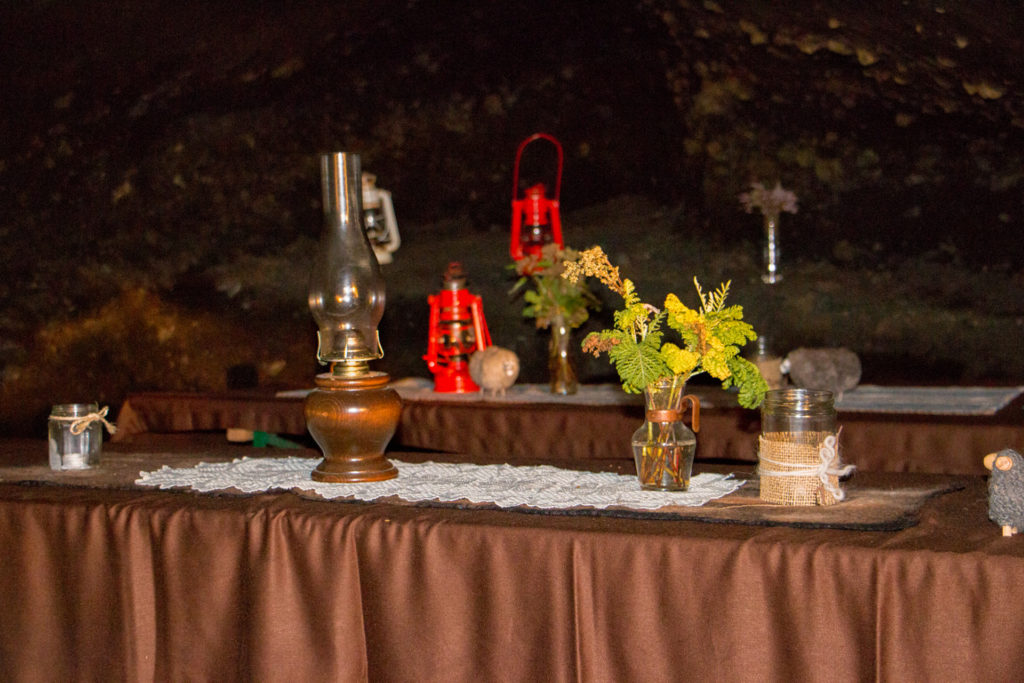 has expressed interest in doing research at the caves. That would be very exciting, and would no doubt turn up a lot of interesting information. Smári has put a lot of work into restoring the caves to their lived in condition. The house-cave has been restored to its 1920 appearance with historically appropriate furnishings so the visitor can get a sense of what it was like to live there. The sheep pen cave has been converted into a cafe where visitors can get a cup of coffee or tea, and maybe a cookie or muffin The cafe is heated by a generator so it’s comfortable enough to enjoy coffee. 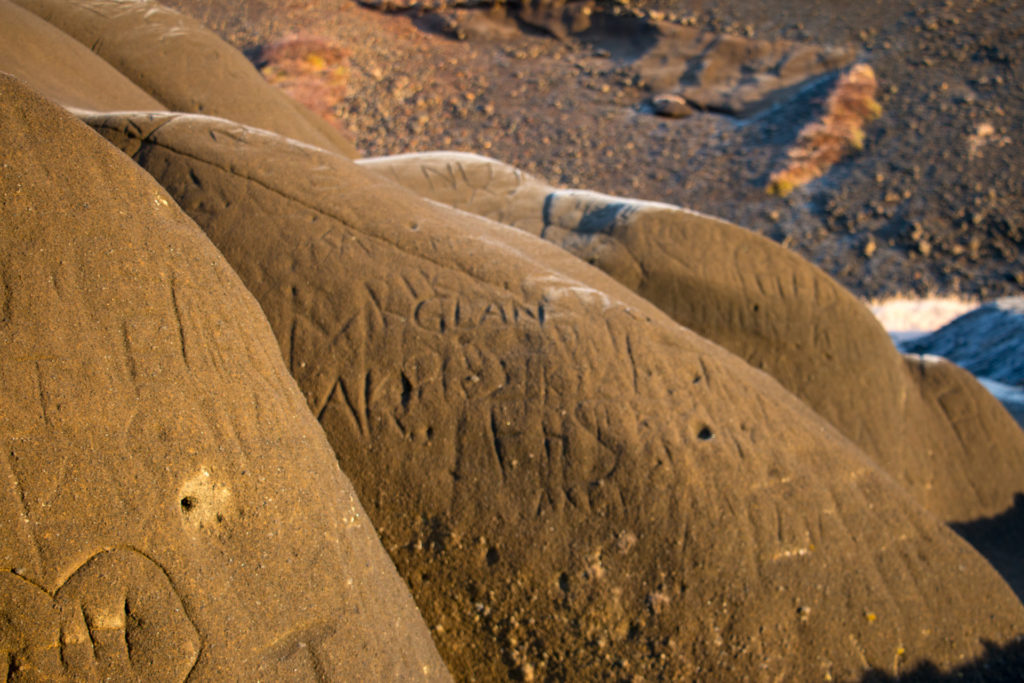 I hope that if you’re ever in the Laugarvatn area you will spend some time there. I found it so interesting, and the landscape is wild and beautiful, just what you want from Iceland.