Deciding to paint twenty meters (sixty-five feet) of canvas with small white dots is not to be taken lightly. My studio isn’t large enough to spread out five meters of canvas, never mind twenty. Also, there’s no art supply store in Longyearbyen. While in most small towns you can drive to the next largest town where they’ll have stores. Here you have a choice of taking a boat (in summer) or driving a snowmobile (in winter) to two even tinier towns. 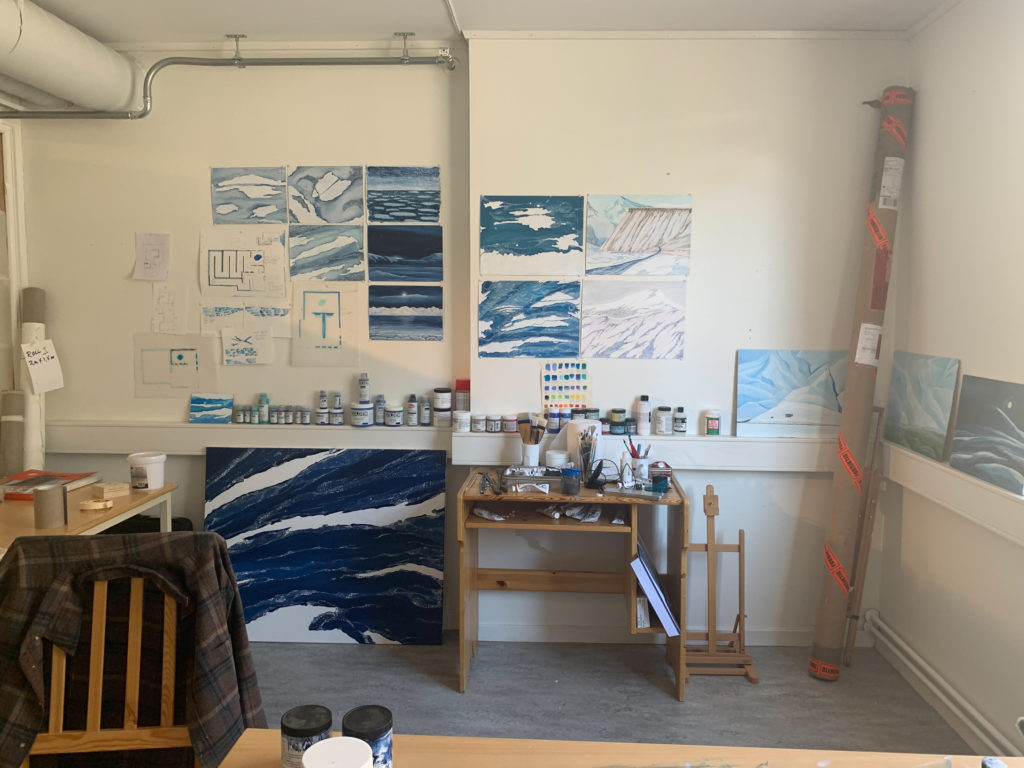 But this is an odd place so unexpected things crop up. I discovered while asking people in town if anyone had any canvas that the now defunct 78 North had two one meter canvases in their store room, and that the framing shop in town had a roll of canvas they bought thinking that they might be able to sell it, but had not. I bought everything. That was my first ten meters, and the two one meter test canvases.

Next I had to devise a way to paint something so large. Stretching it was out of the question. Also, I wanted to treat the painting like a tapestry. I wanted it to stay soft. What I did was unroll about two and a half meters which I had wall enough for, then use giant binder clips to clamp the canvas between two three meter pieces of strapping. I nailed drywall nails into the wall, then hung the strapping from the nails while leaving the unpainted canvas in the roll.

Again, because this is Svalbard, this was complicated. I could only find screws in town, no nails. So a friend and I scavenged trash bins outside of workshops in an industrial part of town until we found a pack of wallboard nails someone had thrown out. The strapping was leftover from mounting my last year’s show of cyanotypes. I thankfully had enough left for this purpose. The binder clips came from several trips to the store.

But it worked! I could paint my nearly three meters, then lay it out on one of the big exhibition room floors, and reroll/unroll it like a scroll to reveal the next few meters. I was fortunate that both the Galleri Svalbard admins, where my studio is located, were good natured in helping me with this since I could not manage it alone.

I took two weeks before the exhibition to roll everything out on the floor. I knew that no matter how much I thought about how I wanted these pieces to progress, there would be problems that needed fixing once I saw them all together. One of the things I did was repaint portions of the ten meter piece to even out the transition from the chaos of many dots and white islands to the big blocks of white ice and white coast. 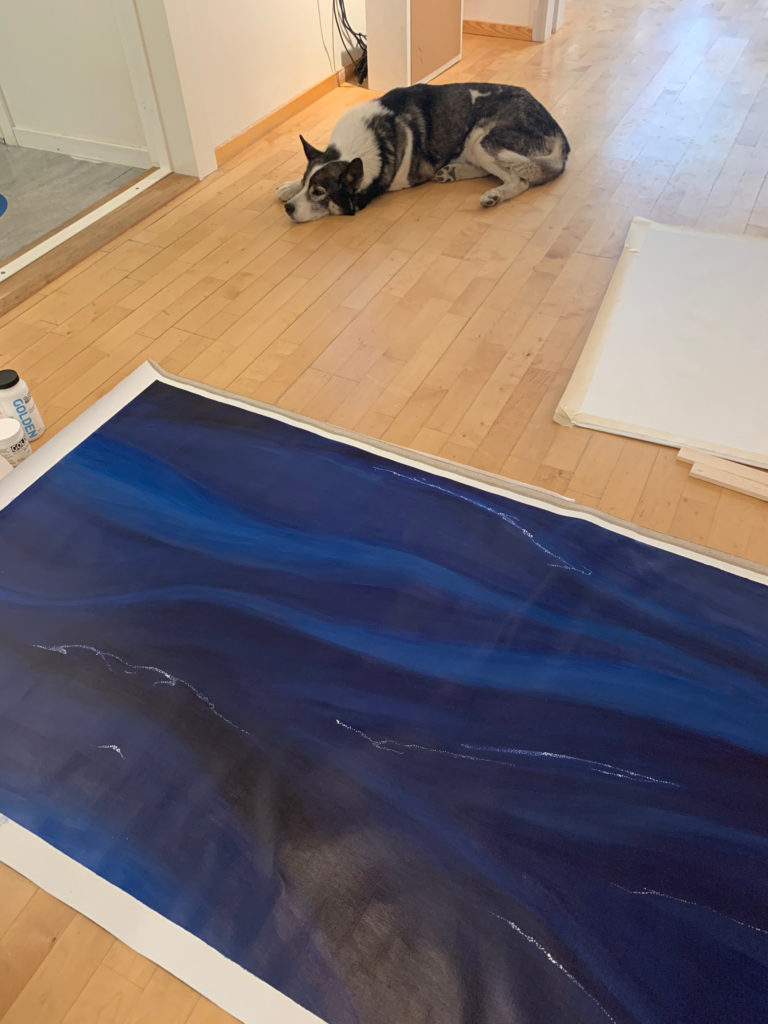 What I hadn’t realized was that painting all of these white dots would destroy my brushes. There is a crispness to the brushstrokes in the first ten meters that gradually becomes fuzzy while painting the last ten meters. I wasn’t happy with this, though there was a limit to what I could do with no ability to buy additional brushes, or at least not get them in time. Several days were spent evening out the texture of the brush strokes. I didn’t repaint every brush stroke, nor did I want to, but I wanted the change to appear gradual and blended.

When this was done the pieces were tacked to the wall to stretch and let gravity work on the wrinkles in the canvas. While this was happening wood was purchased from local construction companies (there is no lumberyard here) from their supply. Half of it warped because of the dryness in the gallery and became unusable. But what was good was measured, cut, then screwed to the wall to become the frame the paintings would be stapled to.

There were problems. Not all of the canvases were square, and one was off enough it had to be specially stretched. I had ordered a pair of canvas pliers two weeks earlier. They didn’t arrive until two weeks after the show opened. So with help from Jan Martin, the galleri curator, we stretched the canvas by hand which was slow and painful. I wore the skin off a couple of fingers during this process, and every day I would tighten the canvas again as much as I could to get it as flat as I could given I didn’t have canvas pliers. 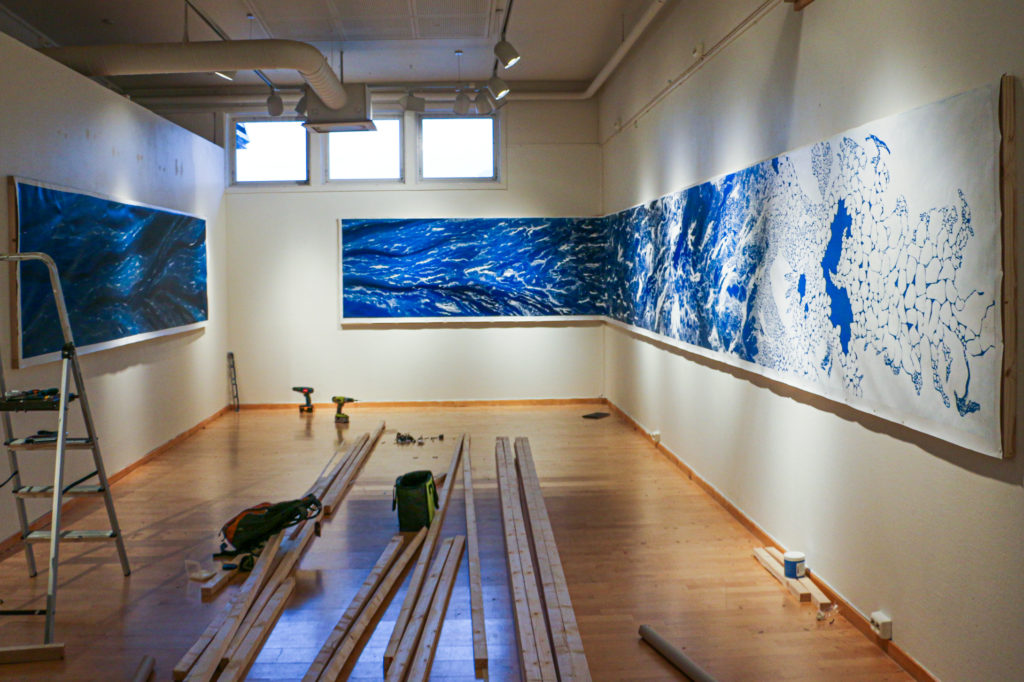 The last thing was building the center wall. I wanted to ensure that visitors would see the paintings in order from the most simple image of water and a little ice, to the very complex title piece, Loss and Change. So the wall had to be tall enough to prevent people from looking over it, and solid enough to prevent people from walking through it. In most places, I would have built a plywood or MDF wall on a frame and painted it white or neutral gray.

But wood panels of any sort are extremely expensive here. Instead, Jan Martin built a beautiful frame, and we stretched a black opaque fabric over it. The fabric was left over from a previous exhibition so we repurposed it for mine. It solved the problem of how to encourage visitors to view the exhibition in the order I wanted them to see it. 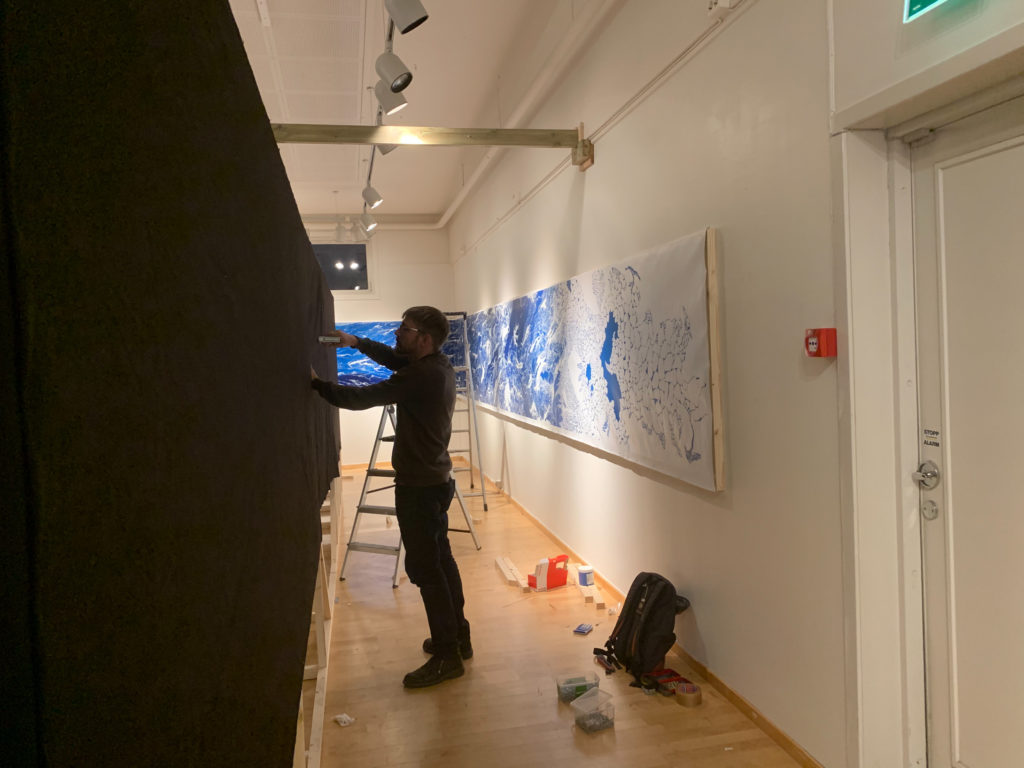 As for me, I am satisfied. Part of me wants to do this all over again in a studio space where I had room to work on the entire ten meters at a time. I could do it better. I could plan the flow better. This time I would have enough brushes, be certain I had enough paint. But another part of me thinks that perhaps it is just as well that I could only see a few meters at a time. It is much easier to paint two meters and then another two meters then another two meters. I think to see it all at once might have left me feeling overwhelmed. It’s hard to tell. I loved painting it. Sometimes it was hard. Some days I wept through the work because of the emotions that surfaced, but it was always rewarding. I hope you get a chance to see it in person some day. It is astonishing.